Spain and Cyprus - Savers Get Robbed Either Way

Warning: The bankers and the government will get your savings one way or another. 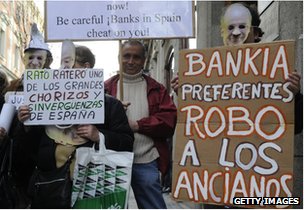 Note the protest sign at top:  Banks in Spain cheat on you!
BBC News - Getty Images


If you think Cyprus is a mess and the people there might get their savings accounts raided, wait until you see what the bankers and the government have just done in Spain.


Following the housing market crash in Spain, a number of regional banks were rapidly moving towards bankruptcy.  As a means of fixing this problem, the Spanish government and its central bank orchestrated a 2010 scheme whereby seven of the banks would be rolled into one and recapitalized.


As a means of raising cash for this new creation to be known as “Bankia” Spanish citizens were told by their local bankers that they could buy shares. Based on years of trust and government approval, some 350,000 Spanish citizens sank their hard earned cash into the new shares.


The Bankia shares were valued at 3.75 Euros and the citizens were told the bank would have a rough start followed by a return to profitability in a relatively short time.  Indeed, the bank announced that for 2011 it would make a small profit of 309 million Euros.


Instead of making some 300 million Euros as announced, the bank later re-estimated its accounts and stated that it would lose approximately 3 BILLION Euros instead.


The upshot for the Spanish citizens was that their 3.75 Euro shares were today valuated at – get this -.01 Euros or one cent apiece.  To add insult to injury, the Spanish government has also announced there will be a sort of inverse stock split of 100 to 1.


In other words, for every 100 shares you have in Bankia, they will now be turned into one share that will be worth 1 Euro.


Spanish savers (350,000 of them) were given a major haircut. Their 3.75 a piece share actually bought them 1 cents worth of value.


How is that for a haircut?


There is a lesson in this. Savers have money.  And when the bankers and the governments decided they need it – they will take it one way or another.


In Cyprus, the savers (and the non-resident Russians) may lose some of their money in an involuntary onetime tax or levy. In Spain, the savers were just fleeced the old fashioned way by con artists.


This is economics for the rest of us.  Savers beware no matter where you are!
Posted by Honest Banker at 6:07 PM

Honest Banker
Hi there! We here at the Honest Banker do not have PhDs in Economics like Ben Bernanke over at the US Federal Reserve. Nor do we have Harvard degrees like Governor Mark Carney of the Bank of Canada/Bank of England. We are not quants with math degrees. What we do have is practical education and honest experience. We contribute to the real world economy while trying to figure out how to survive and build value in our lives and our communities under the current economic model. This model has been dictated to us by economists and politicians using many of the same seriously failed economic models that gave us the financial collapse of 2007 and 2008. This is “economics for the rest of us” who live in the real world and are trying to figure out how to survive in it despite what the financial sector is doing to us.